RWBY Fanon Wikia is a site dedicated to storytelling within Monty Oum's universe. As such, these Guidelines are put in place by the Roleplay Moderation Team to provide users with a streamlined and effective way for participating in Roleplays and character creation.

Guidelines are, however, subject to change as more of the workings of the RWBYverse are revealed and explained. In addition, please keep in mind that the Guidelines and the "Accepted Character" category is not an award system. Not being "accepted" does not mean one cannot RP on this site.

The nature of the "Accepted Character" tag is simply to give users a quick filter when choosing other users/characters to role-play with.

If you are unsure about a particular ruling, and how it may pertain to your Character or other Original Content, feel free to ask a Reviewer, Administrator or other Staff members for assistance. Their names can be found in the Community tab. Furthermore, users can join the site's Discord Channel and ask using the #fanon_help_chat channel for more active help.

Rules will be marked with 1 of 4 labels:

REVIEWER DISCRETION - WHAT IS IT?:

Reviewer reserve the right to be flexible in their judgment when the Guidelines are insufficient in their decision. This degree of freedom requires the use of multiple rules and common sense in order to discern what is and is not acceptable.

Please note that a reviewer's word is law but not final. Concerns may be brought up with the reviewer provided that the argument is valid*.

*Valid arguments should be built upon with sound evidence. Not unlike a trial, it is best to have another reviewer to be a representative in the case should a concern be brought up. 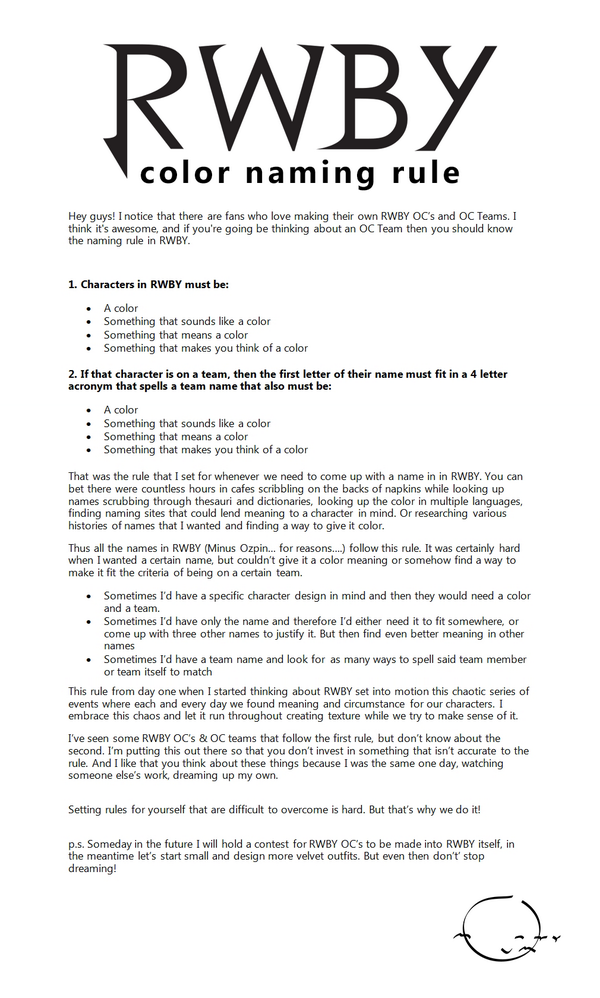 The Color Naming Rules do state that more than the name, but the character themselves should be a color, or take after one. As such, their physical and mental characteristics are designed to reflect appropriately.

That being said, it is not mandatory to have the colored name be included in the physical appearance of the character.

Names are creative and unique, break the mould! Use other languages, find something that fits, then spin it a few times to make it your own! Look at the Canon for examples, some of the canon characters names come from obscure origins.

As of update 6 on 7/16/2019, the grandfather clause has been repealed, meaning all characters under it must now have a valid color relation as per the Color Naming Rule. This will be made effective on a case by case basis whenever any of the OCs in question may be put back in the pending category or otherwise be noticed by a reviewer. In case the OC already is CNR compliant and has the information included in the Trivia section the grandfather clause category will simply be removed from it by any reviewer that may come across the character’s page.

Exceptions to the 4 point limit may be allowed under Reviewer discretion. So long as the extra features do not drastically affect the OCs overall abilities, and/or their overall abilities are still fairly balanced.

Hardlight dust performs slightly worse that regular physical weapons and armor, in terms of being able to cut and damage targets, as well as blocking attacks. This is due to lack of effective mass and being frailer than their material equivalents. They also exert purely physical force, and do not burn, electrify or affect objects they come in contact with in any other way.

Using Hardlight Dust projected melee weapons is allowed, but each type of weapon projected will count as one transformation form in the weapon transformation limits rule, meaning OCs may only have a maximum of 4 types of hardlight melee weapons. Casting spells or projectiles using Hardlight Dust is not subject to this limit, but may still be limited under reviewer discretion.

The strength of barriers/shields and versatility of things made with Hardlight Dust goes like this:

Heavy machinery > man portable devices > casting (through woven Dust, crystals and vials in tools or weapons and such. No hardlight bodily infusion)

For balance reasons, some Hardlight constructs can only be done with specialized devices, such as shield generators. These are marked below with **.

What Hardlight Dust can create:

Semblances are NOT Mandatory. If you do not wish to have a Semblance or cannot think of one for now, you may skip this category. However, when your character does inherit one, he or she must be subjected to pending and be re-accepted before being able to participate in RP once again.

DISCOURAGED - UP TO HEAVY REVIEWER DISCRETION:

Fan-made Creatures of Grimm are not required to go through the reviewing process, but the rules below outline the known traits at the time which should be followed when designing one.

Grimm body parts, such as Cinder Fall's Grimm-arm, are not acceptable due to the following reasons:

Retrieved from "https://rwbyfanon.fandom.com/wiki/Guidelines?oldid=455610"
Community content is available under CC-BY-SA unless otherwise noted.